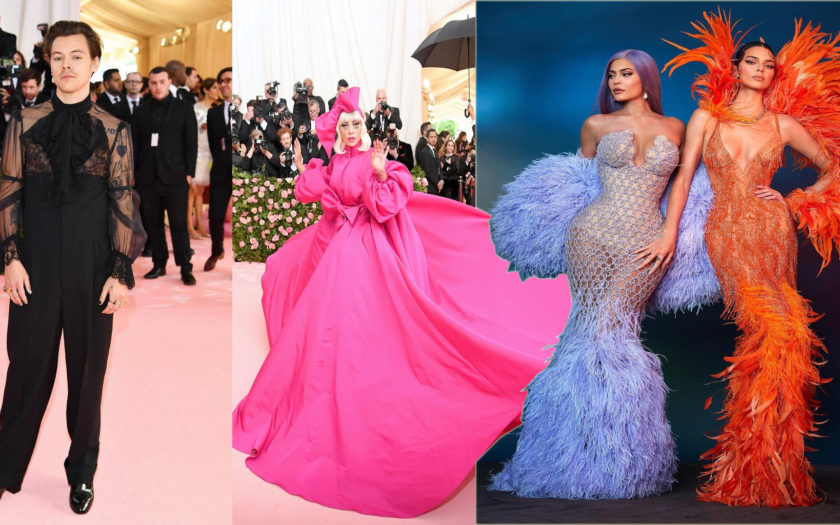 Met Gala 2019 saw Kylie and Kendall Jenner in Versace. These two did not shy from the theme… after all, they’re the Kardashians. The sisters decided to show up on the red carpet with a look inspired from Cinderella’s Wicked Stepsisters. Kylie went for a purple slick gown with matching coloured hair. As for Kendal, orange was her new black. She boasted a slick orange gown with feathers. Both pointed out on their own Instagram stories that they’re representing the evil sisters of Cinderella! Hmmm… we wonder who Cinderella in their story is… definitely not Kim!

Cardi B – She Who Went With Ten Feet Of Silk!

Alright… Met Gala 2019 was about exaggerations and all, but this one went a little bit overboard. Who literally walks in, with about ten feet of tulle and silk coupled with 30,000 burned and dyed coque feathers? Cardi B, obviously! The singer wore Thom Browne’s designer gown, all topped off with a Stephen Jones headdress. The sanguine coloured gown was surely a burden to hold onto for the whole event. Luckily, it could be dismounted into a simple red gown. Cardi B was perhaps one of the most beautiful dress of all times, making her a direct entry in our list!

He did not come to play at this evening of Met Gala! Dressed in a glittering body suit with wings attached to his arms, Billy Porter depicted the Egyptian God Of The Sun for the exhibition. Porter wore The Blonds for the event. The star was carried onto the carpet… Yes, carried… by a group of shirtless male attendants, all of them in gold! They lowered him to the group when he stepped forward for the pictures. There, he spread his golden wings, like a god of fashion, to show-off his golden feathers. Yes, folks… that’s how it is done.

Ezra Miller – He Got His Eyes On You!

A never seen outfit on the red carpet! Ezra Miller is fond of offering trippy looks but this time, he went the extra mile! The actor and singer tapped Vancouver-based makeup artist Mimi Choi for her evening look. Forget about outfit exaggerations. This one meticulously created multiple sets of eyes on his face. A truly dizzying look! Many tagged the make-up as headache inducing. You can’t really figure out which set of eyes to look at. But it was equally wonderful for sure. Apart from his illusionist make-up, Miller wore a pinstripe suite with a train and a corset. All brought together with his binged out black and white shoes.

Met Gala is surely the event where our favourite celebrities show up in their unique dresses. Who says celebrities, says paparazzi, talk shows, films, music and even games. If you are interested in the glamourous world as well, you can visit treat yourself with a celebrity and fun combo with celebrity-themed games. Say yes to the collection of games like Michael Jackson King Of Pop Slot at Luckyvip.com. Plenty of feature-packed slots are ready to be enjoyed via mobile, tablet and desktop devices. Feel free to spare a round or two of these games whenever you want.

What Can a Freelance SEO Expert do for Your Business?

Digital Marketing – Do you need to employ a professional company?