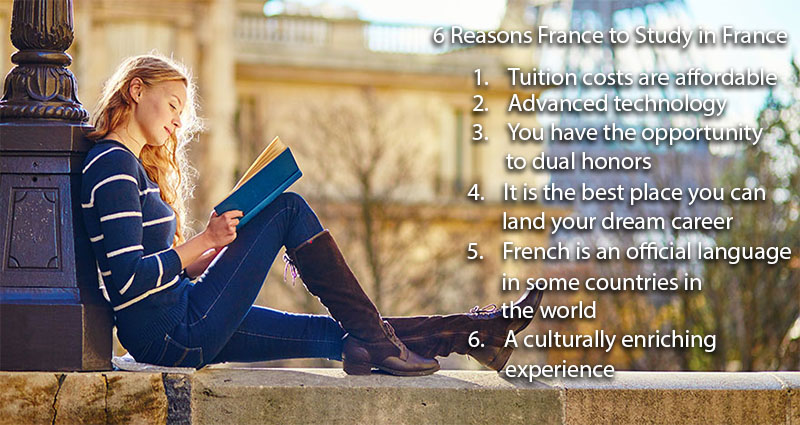 France is blessed with renowned intellectuals, philosophers, artists, computer programmers, and much more. You won’t find anything like this anyplace else in the world. As a result of this rich legacy, France’s public and private institutions continue to attract students from all over the world. If you are going to France from anywhere in the world to study computing or any other course, you have made the right decision. You can see AmonAvis for reviews about France education, and you will see you are not making the wrong decision!

Here are the reasons France is the ideal study abroad option for you!

The government sets the tuition prices for public universities in France much lower than those in other European countries. European Economic Area (EEA) citizens or permanent residents pay as little as €170 per year for bachelor’s programs and €243 for master’s programs in France. Public university Ph.D. students in France pay just €380 a year.

3. You have the opportunity to dual honors

Many universities offer a dual honors degree in computer programming and another area of computer technology and engineering. There will be modules on computer systems, online applications, information and communication networks, artificial intelligence, information technology, and software development. So, you have the opportunity to expand your career.

4. It is the best place you can land your dream career

Technology keeps advancing, and there is a need for more programmers. There are job opportunities for you in France when you finish your studies and stay in France. If you wish to work with market-leading corporations and organizations should seriously consider studying computing in France.

5. French is an official language in some countries in the world

In 29 countries, French is the official language, including some that account for a fifth of global trade. Many sectors in France, the United Kingdom, Canada, Belgium, and other French-speaking countries in Africa are looking for bilingual graduates who can speak French. While English proficiency is high, especially on most university campuses, it is not universal.

A rich cultural environment is available for international students in France, which they can explore. Students who live in or near Paris can visit famous landmarks such as the Eiffel Tower or the Louvre Museum, which has artworks by European artists. Other options include enjoying a coffee in the Left Bank cafes and strolling the same streets that were once frequented by great philosophers and writers, such as Ernest Hemingway and Samuel Beckett.

Aside from your educational aspect, you will also enjoy other benefits when you study computing in France. Many international students travel to France each year because of its many advantages. For instance, some travel because it is one of Europe’s top countries to get an excellent education, start a successful profession, or see the best of European culture. France is just the best place for your computing program.

With so much of our daily lives reliant upon the internet, broadband is now widely…
Previous Post

Join Legacy of Dead for fun or money. Play now in Casitsu Casino