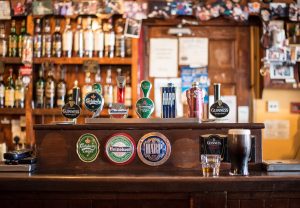 London is full of hipster cafes and trendy wine bars, but fortunately for people who like to have their brains tickled along with enjoying their beverages, there are lots of different places to try out.

Whether you happen to be a board game buff, a gaming geek, or a history nerd, the following are 10 places that are ideal for the next time you go out for the evening.

This is a place for all of the literary history buffs out there. Ye Old Cheshire Cheese is a place where people like Mark Twain, PG Wodehouse, and Charles Dickens have been entertained in the past.

This 17th Century building has been around since right after London’s Great Fire and during the area’s heyday was the Fleet Street crowd’s favourite. They have moved on now, and to this day, the pub has still survived in its original format.

Meltdown bar on Caledonian Road is London’s first e-gaming pub and can be best described as being a sports bar especially for gamers.

You can sip on your game-themed shot or cocktails like a Stimpack, Jim Raynor, or Doom, while you are either playing the featured game of the night via the consoles that are arranged in the formation of an ‘X,’ or watch all of the action on one of the big screens.

This east London board game bar and cafe is the thinking person’s favourite: every month we visit Draughts to play everything from Game of Thrones to Backgammon, Cards Against Humanity, and Hungry Hippos. Pull up a chair, keep your eyes down, and grab a game.

If you are after spirits, then The Viaduct Tavern as London’s surviving Victorian Gin palace, it definitely is worth visiting. St. Paul’s Cathedral overlooks the tavern and was a debtors’ jail in the past for notorious Newgate Prison.

Here is a fun fact: there are some cells still remaining from the jail that are used as a beer cellar by the pub.

Indulge your inner child at the Old School Yard, with 90’s music playing until late into the night, with plenty of classic table football by Babyfoot and pizza. There is also a retro console located in the corner that you can play on for free.

If colouring-in workshops, craft lessons, and Lego robots sound like something you would like, then Drink, Shop, Do, is something that will be right up your alley. This bar/cafe located in King’s Cross is a paradise for the crafty geek, and every night in the week features a new and interesting themed evening.

In Farringdon, the Jerusalem Tavern has been in existence since the 14th Century and its current building goes back to 1720. In addition to its history lesson, you can get a fairly good beer as well: recently the pub was voted by a poll of more than 20,000 Londoners as being the third best pub in all of London.

Go back in time to see a different side of King’s Cross station at the St Pancras Renaissance Hotel’s Booking Office. This historic bar is well-known for its grand cocktails in a very grand setting (to be precise, the original booking hall in King’s Cross) and its 29 metre-long bar is as impressive as its history is.

If you are in the area till the next morning, the adjacent restaurant also does breakfast.

This is the second games bar on the list, based in Dalston further east. Loading Bar provides a place where gamers can relax, drink, and play, with plenty of gaming-theme cocktails offered (naturally, with names such as Alien: Inebriation and World of Barcraft) and consoles spread across the bar that you can play on for free. They host launch nights as well for new games, with numerous themed cocktails offered.

Londoners, particularly the geeks, all are familiar with the V&A, but not everybody ventures as far to say it a beautiful cafe. It isn’t a fancy restaurant, believe it or not, but a coffee and tea room and a place where you can relax and sit with sounds of a piano playing in the background, before or after exploring the museum there.